May 20, 2017
You will find that I write about the weather a lot as the weather plays an enormous part in the life of anyone with ms.
A very large percentage of ms sufferers suffer terribly in warm weather, and only start to find relief from pain and spasticity when it becomes colder.
I am not one of them.
A smaller percentage of ms sufferers are the exact opposite, and their muscles only unclench in warm weather relieving pain and making mobility much much easier - plus, warm weather generally improves life’s outlook and its aspect.
This is me.
We lived in Qatar in the middle-east for 3 years during which time my ms symptoms stayed pretty consistent given that the weather never really became anything less than absolutely scorchingly hot. When we came to NZ and its colder climate, I went rapidly down hill until I needed a rollator almost constantly and getting to the shops or Dr only 500m away was similar in planing and effort in getting a manned mission to Mars.
New Zealand has a ‘temperate’ climate, evidently. This translates in reality at the moment (here in Wellington) into a lot of rain and high wind, followed by icy days and nights. Tonight a vicious cold-front is moving up the South Island (from Antarctica) where the first snows of winter are supposed to materialise during the next 24hr. Us here at the bottom of the North Island will get gale-force wind and temperatures around 3deg C.

I talk to several other ms sufferers online including a lady in the US who recently started to have pretty exceptional results to a fairly experimental treatment. The treatment is chiropractic in nature and her symptoms have reduced by 60% after a few months of this treatment. I have started hunting for a similarly trained chiropractor here in Wellington and will try-out this ‘Atlas Orthogonal’ adjustment therapy and hope for the best. I did also note that the same person is unfailingly optimistic and cheerful in all her dealings and I absolutely swear by the benefits of positivity in combatting ms. I think that her own attitude towards her ms has played a huge part in getting the results she now enjoys.

There are a number of experimental ‘cures’ for ms doing the rounds. There is biotin or vitamin B7 which if taken in large quantities daily - 300mg which is a huge amount - has various benefits on ms symptoms. Others have tried CSVI (Chronic cerebrospinal venous insufficiency) which was a term coined by a Dr in Italy, several people have reported benefits from this therapy which entails inflating veins in your neck, but overall it has been proven to be of temporary benefit and the therapy is not encouraged. The main therapy that people with ms are following, is stem cell therapy and this has reversed several cases of ms although there are side effects (unfortunately death is one of them..) and it is phenomenally expensive.

It can get a bit chaotic when you try to follow what is what regarding a ‘cure’, as as yet no one and I mean NO ONE knows what causes ms. We can look back 13 billion years across the universe and read the chemical composition of stars millions of light years distant from us. But we still do not know what causes ms, and until we know what causes ms, a definitive cure is a long way away. The other extremely frustrating thing about ms is that no two cases are the same and because of this the medical profession argues and disagrees as to what actually constitutes ms…..

I was battling extremely so up to a year ago, and now I can go up and down a flight of stairs to our second floor, something I had given up hope of ever being able to do again. I don't do great all the time at all and there are times when I get really worried. But overall there is this curious streak running through the course of this disease and that is its utter unpredictability and complete lack of consistency.

The photo that follows was taken on my phone at the QNCC a few years back and it is apropos of absolutely nothing..I just like it! 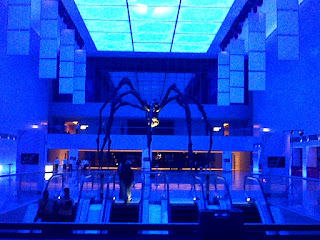