April 28, 2017
My darling son who is all of 7-and-a-half, bought home from school a ‘bug’ the effects of which he got over in a day or two but which absolutely flattened me. It served to remind me that ms is a disease that affects your immune system and when the immune system is attacked your body goes berserk.
In the space of a few hours I became unable to walk upright, or sleep or see straight. It took a good week before I reset back to ‘normal’ again.
I follow this guy Nick – http://www.masteringmountains.org/about-nick/ – with great interest. He is about as close to a hero as you could get for me, and really serves to illustrate what can be achieved with enough determination, hard work and self-belief. I now live in a two storey house, and before I moved here was quite daunted by the thought of having to go up and down stairs. It was hell initially, and I would plan my day around only going up and down stairs once a day. But after 3 months….wow…now it barely bothers me at all (unless its late and I’m tired) and this week I managed both up and down the stairs standing-up straight without having to ‘gorilla crawl’ the staircase….
tākiri, has discovered an impetus and energy that seems to have come out of nowhere. In the space of a week I have talked to someone interested in being part of tākiri ( and he’s disabled) plus several parastatal organisations have chatted to me about being more closely involved so all-in-all progress and movement…..
This morning I had my weekly Friday road-patrol duty at my sons school. This week of course I was completely alone as the senior kids who normally man the patrol were at a camp. So joyfully in the low morning sun, I stopped traffic perched on my golf-cart while mainly mums and their kids bustled across the road until my rear-left wheel made a ‘clunk’ sound.
A flat.
Bugger… what to do? I am now stranded a km from home and what now?? I finished the road-patrol duty and after deciding to, clunked off to the nearest garage about another km away and yes, they had EXACTLY the same inner tube as fitted my golf-cart and only the one as well at that so today fate was smiling on me…. 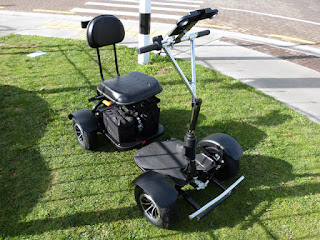