April 28, 2017
I have a walker for getting about most of the time. It allows me to sit when I want and offers some support when staggering about so it is a necessary evil…..I also have a wheelchair combined with a curious piece of torture called a ‘smartdrive’ this is a piece of machinery that clips on the back of the wheelchair and assists the user in moving about – essentially a  little electrical motor. The smartdrive is controlled via a bluetooth wristband that responds to the wearers arm movements and gentle taps of the wristband which evidently stop the machine.  Why the wheelchair? well, it is a little bit of pessimistic forward-planning. At the moment it is not a necessity but there may come a day in the future when it is…..but not today.
The wheelchair is ultra-light and super fast which makes me happy. On one of my first trials after I had mastered getting back up a curb, I decided to head up a curb at about 30 degrees off of centre. I won’t try that ever again as it literally stopped traffic, as passers-by came running to see if there was much blood….
When I was given the combination to test drive, I did so with enormous enthusiasm heading off up a hill with a 30º incline in driving rain towards my son’s school about a km away from where I live. Initially I went up a footpath but I soon got bored with dodging driveways and hedges so went on the road instead……..yeah I know thats not a good idea as it’s dangerous/illegal etc to drive a wheelchair on a public road.                                             ……In the youtube adverts for the smartdrive, the carefree and happy user gracefully negotiates the air-conditioned comfort of malls, hotels and convention centres while smiling broadly, nowhere in any of the videos is there a scene of blind panic and squealing car-brakes as a crazed guy in an out-of-control chair in the pouring rain comes hurtling down a road scattering pedestrians and making cars swerve, while wildly flailing his arms like a windmill and swearing loudly in a vain attempt to stop the thing….
Evidently it is not designed to go up a hill – ever – and especially not in the pouring rain. The little motor is deceptively quite powerful, powerful enough to make gripping the rims of the chair to stop it a waste of time, as it just keeps on going….
Don’t get me wrong, I love the thing. But we eye each other suspiciously across the room…when the weather in Wellington begins approaching anything acceptable, I will go back out with it again…. 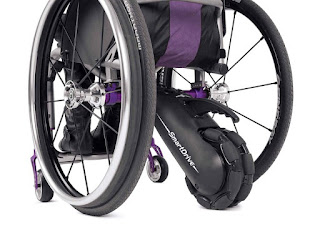