April 29, 2017
Yesterday, my wife, son and I drove 50 something km up the scenic Akatarawa valley where there was nooooo cell-phone signal and the bush closed in on the 15km long single-lane twisty twisty road. But at the end of this road in an almost Alpine-like setting was Staglands – http://www.staglands.co.nz
Staglands is a privately owned park/nature reserve that is so very pretty and generally so ‘nice’ that the admirer quickly runs out of positive adjectives with which to describe the place. I got bored saying how awesome the view of green green bush was, and very tired of constantly and very unnecessarily bringing to everyones attention the pristine unpolluted aspect of the park and the bountiful friendliness of the people working there.
I took my wheelchair and smartdrive along too as I have become very enthusiastic about trying out the various attractions that our fair city holds-up as ‘disabled-friendly’. Previously I visited our exceptional national museum called the Te Papa museum, and the waterfront in the city, and these are both excellent for anyone in a chair to successfully navigate. Also, I tried the police college in Porirua where there is an ornamental lake with a 2km walkway round it – likewise excellent to use. Staglands was a challenge. Getting into the actual park was alarmingly boisterous and features a long 30 degree gravel-covered slope that if it were not for my wife standing in front of me, I would have careened head-long into a duck pond. Once down on the ‘flat’ surface I negotiated the attractions that were within easy reach as going a bit further into the park appeared as bad as getting into the place.
My wife and son went on tractor rides and explored further around us and I chatted to the very friendly manager and some visitors to the park who maybe thought i was an attraction too (???) Also the bird-life in the park seemed to find me alluring and I made friends with an australian cape barren goose (google it) who followed me round like a Labrador.
I would recommend anyone visiting Staglands in a chair, to also use a ‘freewheel’ attachment as ALL the paths are covered in loose gravel and a wheelchair just doesn’t quite handle it on its own. Also the smartdrive unit just doesn’t work on loose gravel – at all. When we left, we had to ask a stout and enthusiastic visitor to push me back up the hill as even if I’d got out of the chair, it would have been very difficult for me and my wife who pushed me… I will buy a Freewheel attachment later this year… – https://www.gofreewheel.com –
Later next week we will explore Zeelandia park – https://www.visitzealandia.com – which says that it is VERY disabled friendly, so I look forward to that.
When we got back to our car, the first thing that we noticed was that the lights were still on.. and of course it wouldn’t start so a call was made to AA (automobile association) who sent out someone who took about 70min to get out there as the place is seriously off the beaten track. All the while that we waited for AA to arrive, we watched the sun slowly start to disappear over the mountains and the cold start to creep up to us and we imagined having to spend the night in our small Toyota overnight……with NO CELL SIGNAL.
Horror. Horror. Horror. 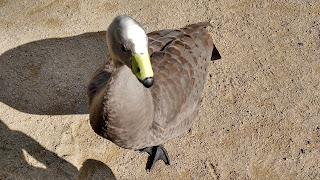